I just can't take it anymore. Even though I swore I would never do this, I'm officially moving over to LJ. My comments are broken again and I have no idea how long that's been going on. My links list is now completely inadequate for my surfing needs. And while populli.net allows linking to RPS, they don't like it, so here we go.........

John Mayer has a crush on Justin Timberlake

I present the following as evidence:

HE [John Mayer] WANTS TO MEET: "Justin Timberlake! If he were a stock, I would cash out all my publishing and buy it. I think Justin Timberlake is the next Michael Jackson. That kid is walking around with this melody bomb in his head and nobody knows it's about to go off."

Although he has been linked to Jennifer Love Hewitt, singer/songwriter John Mayer has a dark and lingering fantasy concerning *NSYNC's Justin Timberlake. Are you hooked now? Okay, good. 'Cause it's not what you think, you dirty-minded bastards. "I love the guy's voice", Mayer says, confirming rumors that the two MTV-certified heartthrobs have been talking about collaborating on new material. "I look at Justin with *NSYNC and I think, 'Okay, these guys are wearing matching jackets that are made of Twizzlers, but there's something waiting to happen there!' I have this fantasy of coming up with three songs for Justin, with my approach to melody and his approach to singing. If people say my working with him is corny, you can give them my number". (Note: He wouldn't actually give us his number.) "Justin looks at his money and his success and says, 'Nope, not done'", Mayer adds. "And I admire that".

Hands down, the most anticipated performance of the evening was Justin Timberlake's solo debut. Even best new artist nominee John Mayer conceded to the INQUIRER: "I think that if I were him, if I had as much as he has going on musically, [this is] the opportunity to show it completely unadulterated. I think he's great."

This is kinda freakin' me out, yo. Because I started getting into NSync and John Mayer and about the same time. In fact, I was reading some of my first puppyslash and listening to JM, and now the two are forever and always linked in my brain. I thought it was pretty freaky when I heard JM singing a little bit of Gone on a live track I dl'ed, but god, who'd a thunk JM was such an NSync fan?

xen @7:51 PMComments []
One of my friends came over to see me yesturday and came into my room to download and burn some CDs. She proceeded to mock me mercilessly for the next two hours for having an NSync wallpaper, and NSync DVDs laying around, and Nsync CD's in the player, and so on and so on. Whatever, I totally expect that. After spending the last several years avoiding NSync as much as possible and ragging on them whenever possible, I should be mocked for now being their fangirl. But after two hours of teasing me, she admitted she'd fuck Justin. of course

In other news, I'm having a floofy hair day. The adjective fluffy just doesn't convey the goofiness of my hair today.

They just make me happy. I have no other explanation for the sudden change in my fannishness. They make me giggle like a little girl. And that is explanation enough, I think. My whole outlook on life is all happy and sparkly for the first time in a very long while, and that is OK by me.

I was just minding my own business, picking up some groceries, waiting in line at Albertson's, and this issue of J-14 jumped into my basket all on its own. I swear, that's exactly how it happened. It, like, fell out of the sky or something. I definately did not buy it on purpose. That would be both wrong and bad.

My copy of Reel NSync came in the mail Saturday. Baby Chris is the cutest thing I've ever seen in my life, way cuter than baby Justin. I've watched the No Mercy thing an embarrassing number of times already.

Poor baby. I so wanted this to happen.

"I would like all of you to know that I am fine, that the scuffle at the MTV Awards involving Eminem, Moby and Eminem's trusty friend who threw my pooping paper in the air did not result in permanent injury," the comedian wrote on his official Web site. "I only wish Eminem could relax and enjoy all he has: his unique talent, and his smooth white hair, which brings to mind a beagle's nutsack. He should lighten up ... I mean, my mom was a bitch too, but I don't go writing songs about it. --Triumph the Insult Comic Dog

Heimlich Demands Maneuver Royalties
CINCINNATILawyers for Dr. Henry Heimlich, inventor of the Heimlich maneuver, warned Monday that the doctor will sue anyone who performs his patented procedure without paying royalties. "The Heimlich maneuver is a registered trademark of my client," attorney Steve Greene said. "We are prepared to protect Mr. Heimlich's proprietary rights, even if it means filing a legal injunction against any non-royalty-paying choking victims."

Uh, I lied. Does anyone give a crap about Guns and Roses playing? 'cause I couldn't care less. I could seriously do without that bit of high school nostalgia right there.
xen @10:12 PMComments []
I actually downloaded Like I Love You a few days ago, and I like it a lot. I can't tell if I'm simply blinded by BSO lust or if it's actually good. But I think it just might possibly be good. I'm not sick of listening to it yet. It's not NSync, that's for sure. His performance kicked ass. Again, not sure if I am being objective, but anyway. That rocked. And Chris is looking very studly tonight, but then he always does. Jimmy Fallon's Lance impression cracked me up.

I still think Nelly should have performed Hot In Herre tonight. And Eminem needs to get his ass kicked.

xen @10:05 PMComments []
OK, Justin, it's all up to you now. You're my last hope, baby.
xen @9:43 PMComments []
How are you supposed to be able to choose between The Vines and The Hives when they both sound exactly like the Nirvana rip offs they are? OK, I guess The Vines sound more like Nirvana than the Hives so they win.
xen @9:41 PMComments []
OK, Marshall, if you are going to dish it out, you better be able to take it. Whiny ass baby girl.

And why the hell didn't Eminem do Without Me?

Carson Daly is a tool and I hate MTV

I heart WQ. She is just my favorite person right now. I'm wallowing in Trickyfish nirvana at the moment.

I have decided that any story with Chris is a good thing. Chris with Lance is my favorite, but I also dig Chris with Justin or Joey. JC is not really my cup of sparkly tea. Chris is the little black dress of NSync slash for me.

I'm not sure why I even still post here. I never have anything important to say.

It seems wildly unfair to me that "Girlfriend" is not on the Pop Odyssey DVD. hmph I think that's my favorite choreography and I only have a crappy copy recorded the Atlantis thingy on UPN. All that sexy stalking back and forth across the stage....

You know, it had to be NSync, because it is possibly the only thing gayer than Smallville. And it's so relaxing. While it's true you can turn around now without tripping over NSync licensed merchandise (this was impossible a year ago), there is still lots of stuff around, if one is inclined to look. As someone used to special ordering practically everything fannish from Canada, it's a nice change. I'm not buying NSync fruit snacks, though. They are filled with gooshey stuff, just ew.

I rarely have fannish dreams. I think I can count them on one hand. I remember a Farscape dream, long ago during the first season. I'm pretty sure I have had a Buffy/Angel dream or two. I don't ever remember having a Smallville dream.

I've had NSync dreams every night for the past week. I'm not sure what this means, but I'm really not complaining.

I'm going to talk about "Signs" now, so if you want to see it completely unspoiled, you should probably bail now.

So I saw Signs this weekend. I was really excited to see it. Everyone is raving about it. People who's opinions I generally respect loved it. I hated it. With the burning passion of a thousand suns. Technically, I can't fault it. The performances are genuine and engaging. The kids were natural and the effects didn't overshadow the story. It's the story itself I have a problem with. And it's MY problem, and my problem only. What's the theme of this movie? Have faith and everything will be OK. Baptism will save us all. The last words of a dying person pinned to a tree will lead us to salvation. Fuck that right in the ear. It's like Mel Gibson says in the movie, there are two kinds of people, those who have faith and those who don't. I don't believe in faith. I believe in nothing and I believe in everything. You know that girl in American Gods who convinces Shadow that she believes in everything, even things that contridict each other? That speech really moved me. It's very similar to how I think about religion. It's possible that all religions are right, and it's possible that they are all horribly wrong. Either way, it doesn't matter to me at all. I will die, and I will find out for myself and so will everyone else. I refuse to live my life based on a 50/50 chance. Heinlein said it best, faith is a lousy way for a diety to run a universe.

My Big Fat Greek Wedding is the sweetest, funniest and most romantic movie ever....and Joey is a sexy beast. That is all I have to report at this time. 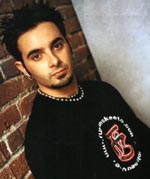 entries from my old pita:

made on a Mac